Fish and chips is a hot dish consisting of fried fish in batter served with chips. The dish originated in England and is an example of culinary fusion of its two main ingredients, each brought by immigrants. It is a staple meal and a common take-away food in the United Kingdom, Ireland, and numerous other countries, particularly in English-speaking and Commonwealth nations. Fish and chips first appeared in the UK in the 1860s. By 1910 there were more than 25,000 fish and chip shops across the UK, and by the 1930s there were over 35,000, falling to about 10,000 by 2009. The British government safeguarded the supply of fish and chips during World War I and World War II; it was one of the few foods in the UK not subject to rationing.

The tradition in the UK of fish battered and fried in oil may have come from Jewish immigrants from Spain and Portugal. Originally, Western Sephardic Jews settling in England as early as the 16th century would have prepared fried fish in a manner similar to pescado frito, which is coated in flour then fried in oil. Charles Dickens mentions “fried fish warehouses” in Oliver Twist (1838), and in 1845 Alexis Soyer in his first edition of A Shilling Cookery for the People, gives a recipe for “Fried fish, Jewish fashion”, which is dipped in a batter of flour and water.

The exact location of the first fish and chip shop is unclear. The earliest known shops were opened in the 1860s, in London by Joseph Malin and in Mossley, near Oldham, Lancashire, by John Lees. However, fried fish, as well as chips, had existed independently for at least fifty years, so the possibility that they had been combined at an earlier time cannot be ruled out.

Fish and chips became a stock meal among the working classes in England as a consequence of the rapid development of trawl fishing in the North Sea, and the development of railways which connected the ports to major industrial cities during the second half of the 19th century, so that fresh fish could be rapidly transported to the heavily populated areas.

Deep-fried chips (slices or pieces of potato) as a dish may have first appeared in England in about the same period: the Oxford English Dictionary notes as its earliest usage of “chips” in this sense the mention in Charles Dickens’ A Tale of Two Cities (1859): “Husky chips of potatoes, fried with some reluctant drops of oil”.

The modern fish-and-chip shop (“chippy” in modern British slang) originated in the United Kingdom, although outlets selling fried food occurred commonly throughout Europe. Early fish-and-chip shops had only very basic facilities. Usually these consisted principally of a large cauldron of cooking fat, heated by a coal fire. The fish-and-chip shop later evolved into a fairly standard format, with the food served, in paper wrappings, to queuing customers, over a counter in front of the fryers. By 1910, there were more than 25,000 fish and chip shops across the country, and in the 1920s there were more than 35,000 shops. As a boy Alfred Hitchcock lived above a fish and chip shop in London, which was the family business. According to Professor John Walton, author of Fish and Chips and the British Working Class, the British government made safeguarding supplies of fish and chips during World War I a priority: “The cabinet knew it was vital to keep families on the home front in good heart, unlike the German regime that failed to keep its people well fed”.

In 1928, Harry Ramsden opened his first fish and chip shop in Guiseley, West Yorkshire. On a single day in 1952, the shop served 10,000 portions of fish and chips, earning a place in the Guinness Book of Records. In George Orwell’s The Road to Wigan Pier (1937), which documents his experience of working class life in the north of England, the author considered fish and chips chief among the ‘home comforts’ which acted as a panacea to the working classes. During World War II, fish and chips remained one of the few foods in the United Kingdom not subject to rationing. Prime Minister Winston Churchill referred to the combination of fish and chips as “the good companions”. John Lennon enjoyed his fish and chips—a staple of the working class—smothered in ketchup.

British fish and chips were originally served in a wrapping of old newspapers but this practice has now largely ceased, with plain paper, cardboard, or plastic being used instead. In the United Kingdom, the Fish Labelling Regulations 2003 and in Ireland the European Communities (Labelling of Fishery and Aquaculture Products) Regulations 2003 respectively enact directive 2065/2001/EC, and generally mean that “fish” must be sold with the particular commercial name or species named; so, for example, “cod and chips” now appears on menus rather than the more vague “fish and chips”. In the United Kingdom the Food Standards Agency guidance excludes caterers from this; but several local Trading Standards authorities and others do say it cannot be sold merely as “fish and chips”.

A prominent meal in British culture, fish and chips became popular in wider circles in London and South East England in the middle of the 19th century: Charles Dickens mentions a “fried fish warehouse” in Oliver Twist, first published in 1838, while in the north of England a trade in deep-fried chipped potatoes developed. The first chip shop stood on the present site of Oldham’s Tommyfield Market. It remains unclear exactly when and where these two trades combined to become the fish and chip shop industry we know. A Jewish immigrant, Joseph Malin, opened the first recorded combined fish-and-chip shop in London in 1860; a Mr Lees pioneered the concept in the North of England, in Mossley, in 1863.

The concept of a fish restaurant, as opposed to take-away, was introduced by Samuel Isaacs (born 1856 in Whitechapel, London; died 1939 in Brighton, Sussex) who ran a thriving wholesale and retail fish business throughout London and the South of England in the latter part of the 19th century. Isaacs’ first restaurant opened in London in 1896 serving fish and chips, bread and butter, and tea for nine pence, and its popularity ensured a rapid expansion of the chain.

The restaurants were carpeted, had table service, tablecloths, flowers, china and cutlery, and made the trappings of upmarket dining affordable to the working classes for the first time. They were located in London, Clacton, Brighton, Ramsgate, Margate and other seaside resorts in southern England. Menus were expanded in the early 20th century to include meat dishes and other variations as their popularity grew to a total of thirty restaurants. Sam Isaacs’ trademark was the phrase “This is the Plaice”, combined with a picture of the punned-upon fish in question. A glimpse of the old Brighton restaurant at No.1 Marine Parade can be seen in the background of Norman Wisdom’s 1955 film One Good Turn just as Pitkin runs onto the seafront; this is now the site of a Harry Ramsden’s fish and chips restaurant. A blue plaque at Oldham’s Tommyfield Market marks the first chips fried in England in 1860, and the origin of the fish and chip shop and fast food industries.

Dundee City Council claims that chips were first sold by a Belgian immigrant, Edward De Gernier, in the city’s Greenmarket in the 1870s.

In Edinburgh, a combination of Gold Star brown sauce and water or malt vinegar, known as “sauce”, or more specifically as “chippy sauce”, has great popularity; salt and vinegar is preferred in Glasgow, often prompting light-hearted debate on the merits of each option among the cities’ residents who claim to find the alternative a baffling concept. 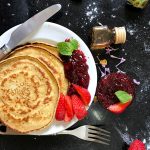