A full breakfast is a substantial cooked breakfast meal often served in the United Kingdom that typically includes bacon, sausages, eggs, black pudding, baked beans, tomatoes and mushrooms and a beverage such as coffee or tea. It comes in different regional variants and is referred to by different names depending on the area. While it is colloquially known as a “fry up” in most areas of Britain and Ireland, it is usually referred to as a full English breakfast in England (often shortened to “full English”), and as a “full Irish”, “full Scottish”, “full Welsh”, “full Cornish”, and “Ulster fry” in the Republic of Ireland, Scotland, Wales, Cornwall, and Northern Ireland, respectively.

It is so popular in Britain and Ireland that many cafes and pubs offer the meal at any time of day as an “all-day breakfast”. It is also popular in other English-speaking countries, particularly countries that were a part of the British Empire. On its origin, Country Life magazine states, “The idea of the English breakfast as a national dish goes right back to the 13th century and the country houses of the gentry. In the old Anglo-Saxon tradition of hospitality, households would provide hearty breakfasts for visiting friends, relatives and neighbours.”

The full breakfast is among the most internationally recognised British dishes along with such staples as bangers and mash, shepherd’s pie, cottage pie, fish and chips, roast beef, Sunday roast and the Christmas dinner. The fried breakfast became popular in Britain and Ireland during the Victorian era, and appears as one among many suggested breakfasts in home economist Isabella Beeton’s Book of Household Management (1861). A full breakfast is often contrasted (e.g. on hotel menus) with the lighter alternative of a continental breakfast, consisting of tea or coffee, milk and fruit juices with bread, croissants, bagels, or pastries.

Breakfast cereal often precedes this, and the meal concludes with buttered toast spread with marmalade, honey, or other conserves.

Alternative main dishes are kippers, kedgeree (now rare), and devilled kidneys. In grand houses and hotels in the 19th century small game birds such as snipe and woodcock might be offered, as well as a variety of cold meats.

The “traditional” full English breakfast, treated as a dish rather than a meal, includes bacon (traditionally back bacon), fried, poached or scrambled eggs, fried or grilled tomatoes, fried mushrooms, fried bread or buttered toast, and sausages (also known as “bangers”). Black pudding, baked beans, and bubble and squeak are also often included. In the North Midlands, fried or grilled oatcakes sometimes replace fried bread. The food is traditionally served with tea or coffee, as well as fruit juices.

As nearly everything is fried in this meal, it is commonly known as a “fry-up”. As some of the items are optional, the phrase “full English breakfast”, or “full English” (or “Full Monty”) often specifically denotes a breakfast including everything on offer. The latter name became popular after World War II after British Army general Bernard Montgomery (nicknamed Monty) was said to have started every day with a full English breakfast when in the campaign in North Africa.

The “breakfast roll”, consisting of elements of the full breakfast served in a French roll, has become popular due to the fact it can be easily eaten on the way to school or work, similar to the breakfast burrito in the United States. The breakfast roll is available from many petrol stations and corner shops throughout Ireland.

Ulster
In the north of Ireland, an Ulster fry is a dish similar to the Irish breakfast, and is popular throughout most of Ulster (chiefly in Northern Ireland and parts of County Donegal), where it is eaten not only at breakfast time but throughout the day. Typically it will include soda farl and potato bread.

Similarly to the breakfast roll seen in the rest of Ireland, in Northern Ireland they serve “filled sodas”, which usually consist of a soda farl shallow-fried on one side and filled with fried sausages, bacon or eggs. Fried onions or mushrooms are usually added upon request. Filled sodas are a popular choice for breakfast from roadside fast-food vendors.

Early editions of Brewer’s Dictionary of Phrase and Fable referred to a Scotch breakfast as “a substantial breakfast of sundry sorts of good things to eat and drink”.

Wales
As in the rest of Britain and Ireland, the composition of a Full Welsh Breakfast (Welsh: Brecwast llawn Cymreig) can vary. However, with the new-found appreciation of Welsh food and recipes in the early 21st century, there have been attempts to establish a broad definition.

The traditional Welsh breakfast reflects the coastal aspect of Welsh cuisine. Two key ingredients that distinguish the Welsh breakfast from the other “full” variations are Welsh cockles and laverbread (a seaweed purée often mixed with oatmeal and fried). Both delicacies are traditionally served with thick bacon, but a Welsh breakfast may also include Welsh sausages, mushrooms and eggs. Full Welsh breakfasts are accompanied by traditional breakfast drinks, with Welsh tea a common choice.

Modern alternatives to the traditional full breakfast will often develop the traditional seafood theme. Smoked fish such as sea trout or sewin may be served accompanied with poached eggs. 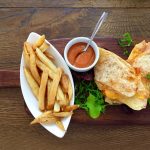